A few months ago, French architect Renée Gailhoustet was awarded the 2022 Royal Academy Architecture Prize. As housing challenges continue to embattle Paris and other French cities today, Gailhoustet was a timely choice, her body of work in the Paris suburbs – stretching back to the 1960s – still functioning today as compelling case studies to a social housing approach that concurrently embraces community and has a uniqueness of form. 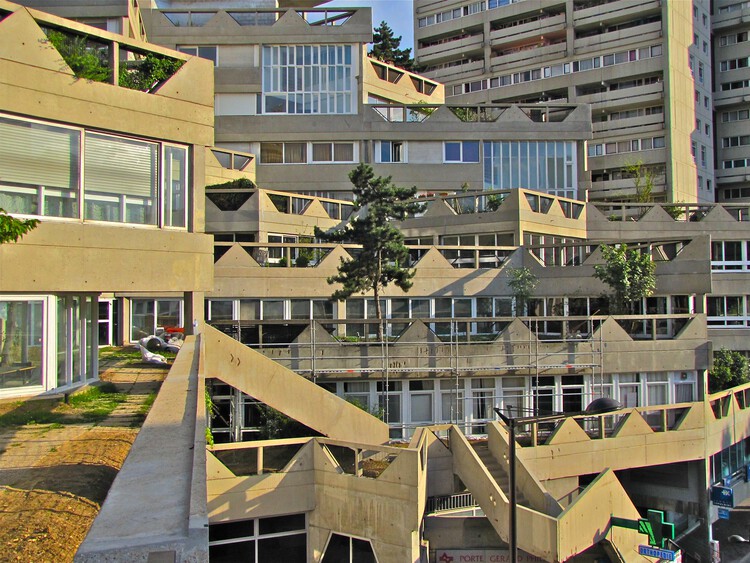 As the slab and tower housing typology came into prominence in the late 1940s in France, ushered in by the beginnings of the term Brutalism with Le Corbusier’s Unite d’Habitation, Gailhoustet, slightly more than a decade removed from this context, pioneered a more urban form of brutalism, where staggered terraces and urban gardens were deployed, and where there was an attempt to harmonize brutalist housing with their street-level context.

Initially working in the office of Roland Dubrulle relatively early in her career, 1962 saw the onset of her participation in the urban renewal of the Ivry-sur-Seine suburbs located in south-eastern Paris. The renovation of Ivry’s center was a response to the pressing postwar necessity of housing in Paris, as the local authority sought to respond to a period of relative economic prosperity by redeveloping an area viewed at the time as unsanitary.

Renée Gailhoustet’s Cité Spinoza Through the Lens of Anthony Saroufim

Gailhoustet became the chief architect on Ivry’s urban plan in 1969, having founded her own firm five years prior. Working in tandem with fellow architect and town planner Jean Renaudie, the plan that Gailhoustet devised for the area was a rejection of large complexes and instead an assortment of various building types, separated by open spaces.

The development and redevelopment of Ivry Sur-Seine is, as a result of this, part of a cohesive urban whole, but with an eclectic diversity in spatial configuration. The buildings in the Ivry masterplan achieve, or attempt to achieve, a fine balance, where some urban quarters necessitated a restrained brutalism, while other areas of the plan were home to more exuberant architectural forms. Both these approaches, nonetheless, endeavored to hold in equal regard a positive influence on the social context as well as the urban.

The Cité Spinoza residential complex is part of this delicate interplay, arguably an example of the former approach. A young workers’ hostel, 80 duplex social housing units, workshops, a medico-psycho-pedagogical center, and a children’s library make up an extensive architectural program. The structure is split into three bars, linked by central vertical circulation that is positioned along pedestrian pathways. It’s this strong consideration for the ground-level experience that strongly differentiates this complex from the Unite d’Habitation model – despite bearing an exterior resemblance on the upper floors to Le Corbusier’s apartment block.

Made up of sharp angles, the Étoiles d’Ivry-sur-Seine is more sculptural, being an example of brutalism on a busy road that takes visual prominence in its streetscape. Offices, apartments, and shops are incorporated into the complex, connected by a fluid system of public and private streets. Ramps are commonplace throughout the development, with a complicated network of corridors acting as circulation between buildings. Inverted bottle-opener-shaped columns open up shopfronts to the street, and the spatial arrangement results in a dialogue that takes place between in-between spaces, walkways, and vegetation.

The question of if the design of Cité Spinoza, the Étoiles d’Ivry-sur-Seine, and the Ivry masterplan, in general, have fostered successful urban settlements remains up for debate. Some transitional spaces in the Étoiles d’Ivry-sur-Seine are neglected, and some shop fronts left vacant – an all-too-common development as local authorities look to adequately maintain buildings and provide affordable housing amidst restricted budgets. But the Étoiles have nevertheless cultivated social connections, with pocket gardens in the complex orientated to allow neighbors to socialize with each other.

Gailhoustet would go on to leave her mark in Paris’ other suburbs, drawing on in Aubervilliers, Saint-Denis, and Villejuif the knowledge and experience gained in the design of Ivry-sur-Seine. Cité Spinoza and Étoiles d’Ivry-sur-Seine might be two developments that are part of the same masterplan, but they display a thoughtful diversity in articulation, where the age-old question of providing high-density housing conducive to social encounters is approached in a mold-breaking way.

As brutalist icons of the past continue to delight, and divide, contemporary audiences, Renée Gailhoustet’s urban brutalism is difficult to categorize – a sound legacy for a form of practice that has seen concrete macrostructures, against their usual stylistic norm, sensitively engage with people and the city.

This article is part of the ArchDaily Topics: Women in Architecture presented by Sky-Frame .

Sky-Frame is characterized by its empathic ability to take on different perspectives and points of view. We are interested in people and their visions, whether in architecture or in a social context. We deeply care about creating living spaces and in doing so we also question the role of women in architecture. From the arts to the sciences, women shape our society. We want to shed more light on this role, increase the visibility of Women in Architecture and empower/encourage them to realize their full potential.

Initiated by Sky-Frame, the “Women in Architecture” documentary is an impulse for inspiration, discussion, and reflection. The film’s release is on 3 November 2022.