Temporary, but with Long-Lasting Effects: 6 Ways in Which Architecture Festivals Can Revitalize a City

Biennales, exhibitions, and architecture focused festivals provide a platform for opening debates, conducting research, and driving innovation, but they can also contribute to the incremental changes that shape the image and the character of a city. Through temporary installations and experiments, this type of events have the opportunity to open lines on inquiry into the quality of urban spaces, inviting visitors and residents to slow down, break away from their daily routine and interrogate their local environments. The effects might not be immediate, but by cumulating these impressions and moments of contemplation, architecture and design festivals can have a long-lasting impact on the cities that welcome them. 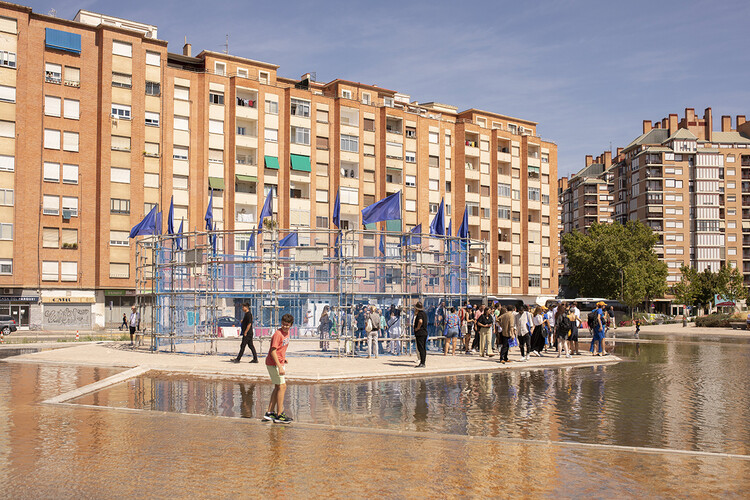 Some festivals like the London Design Festival 2022 or the The Tallinn Architecture Biennale are reinvigorating public spaces by introducing designer and artist-created objects, others like Model. Festival of Architecture of Barcelona are using the opportunity to discuss issues facing the city. Beta 2022, the Architecture Biennial of Timișoara is encouraging passerby to discover new ways of seeing and using their environment, while festivals like Concentrico are exploring ideas of history and appropriation through the temporary installations dispersed throughout the city.

Read on to discover the varied ways in which architecture and design festivals can contribute to creating more enjoyable, inclusive, sustainable, and empowering urban environments.

An Invitation to Slow Down

A single tree is placed in the middle of Times Square, perhaps the most dynamic public space in New York City. Weathered steel and timber gills surround it, attempting to carve out space from the bustling square to allow it to breathe. Visitors are invited to enter the circular installation and to recenter their attention from the frenzy of everyday life in New York, to this small slice of nature. The FILTER installation by CLB Architects offered a temporary experience during the NYCxDESIGN’s 10th edition.

Interventions such as this introduce an unexpected element into the daily routine of a city. The alien objects intend to be somewhat disruptive of this routine, to encourage passersby to slow down and contemplate their environment. Some installations have an agenda, a position regarding an issue plaguing the city, but others are simply pretexts for reflection, inviting people to observe and formulate their own opinions on the character of the city they inhabit.

Rediscovering Overlooked Parts of the City

Most architecture and design festivals create temporary structures throughout the city, many of them in unconventional locations. The purpose is to encourage exploration and discovery. Beta 2022, the Architecture Biennial of Timișoara, has taken this idea one step further. A thin line drawn with yellow paint connects the temporary installations in a looped track measuring over 23 kilometers in length. The path takes those willing to follow it through parks, residential streets, historical and industrial areas, but also underneath bridges or behind public institutions, spaces not typically traversed. The idea behind the exhibition, titled “Another Breach in the Wall”, is to explore urban environments in a way that breaks through the conventions and the ideas that dictate the usage of public space.

Paseo del Espolon is a square in central Logrono, Spain. While being an active place due to its central location, the space does not allow for a variety of uses. During this year’s edition of Concentrico, Matali Crasset’s placed an installation titled “Dark Sky” in this space. The unusual shape quickly captured the imagination of children visiting the square with parents and grandparents. The sides became slides, the space beneath it was a hidden tunnel, while the raised platform acted like a stage. The structure doubled as a small social experiment, introducing a new function to an urban space to underline its potential and challenges the ways we use spaces.

Giving a Voice to Small Communities

Many festivals hope to engage with the local communities, an objective grounded in their understanding of the importance of local citizens in deciphering the hidden codes of urban environments. However, defining these communities can be a challenge, as not all of them subscribe to a typical definition of a close-knot community. Beta 2022 has found a way to address this volatile notion by working with the concept of a “micronation”, a term aimed at describing gatherings of people who developed intrinsic rules and connections. In an effort to increase the architects’ and the larger public’s sensibility to these volatile communities, Beta has asked architects and designers to create spaces for them, aimed to bring visibility and a sense of identity to the otherwise elusive notion.

A Platform for Local Artists

During the London Design Festival 2022, designer Sabine Marcelis revealed a collection of new permanent public seating works. The objects were installed in the St. Giles Square in London, an gray public space overshadowed by the dominating brutalism of Centre Point. The artworks, built out of geometrical blocks of natural stones such as s travertine, quartz, and marble, brought in lively colors, textures and patterns to the plaza. Festivals such as this are pivotal in offering artists and designers a platform for expressing their vision, an approach that leads naturally to better public spaces and more inclusive communities.

The Tallinn Architecture Biennale has taken a different approach to the same idea. The Fungible Non-Fungible Pavilion by iheartblob proposes a decentralized approach in which the community can become both designers and investors for public art, thus changing the role of the architect from “master builder” to “a system designer”. The design of the pavilion uses blockchain technology. The designers created an NFT generative tool, and every NFT minted by this tool funds a physical replica that is integrated into the pavilion. Eventually, the pavilion would be composed of unique parts created by different designers and owners, reflective of a broad and inclusive community.

During the first edition of Model. Festival of Architecture of Barcelona, inaugurated this year, experimental architectural installations aimed to question the way we live together and incite the imagination of residents. One of the installations, the Ark of Coexistence by LEA Atelier and TAKK Architecture, set up a mobile artefact housing a multitude of trees, plants and shrubs. The easily transportable system was meant to raise awareness regarding two interconnected issues: the declining amount of public and green spaces and their impact on global warming and urban biodiversity. By reaccustoming residents to the lush presence of nature, even one confined to a tight platform, the artwork can be understood as a spark to ignite talks about both the city and its localized challenges and human society at large.