When you think of ham radio, you might think of a guy sitting in his basement surrounded by electronics. But a program called Parks on the Air—or more commonly POTA—aims to get ham radio operators out of the shack and into the great outdoors.

Let’s be clear upfront: POTA isn’t the sort of activity suited for your little Baofeng radio or any other similar handie-talkie. POTA is intended for high frequency (HF) communications, the kind that you typically need a General-class license for in the United States. To get started with POTA, you’ll want that license and an HF transceiver. We’ll get to gear in a bit.

POTA is what’s called a radio sport, which is just what it sounds like. The idea is that you set up your radio gear inside a state or national park and make contact with other radio operators, which is called a QSO in ham speak. You exchange basic information and then record it in a log to prove that the QSO happened. Then you email your log to a regional coordinator.

If you make 10 QSOs in a 24 hour period inside a park, you “activate” that park, and move on to another one. You can get various awards, like in a video game, and sometimes even wooden plaques.

The operator who ventures into parks is called an “activator,” but it takes two to tango. You can participate in POTA without leaving home by playing the role of “hunter,” someone who actively listens for POTA operators and tries to help them get activations.

Here’s a video showing what a POTA activation looks like:

Let’s talk gear. As I mentioned, you’ll want a General-class license from the FCC. You also need an HF transceiver. If you’re a hunter, anything works, but serious activators need portable gear.

Small, portable HF transceivers are called QRP radios and they’re much lower power than desktop units. A desktop transceiver like the Icom IC-7300 can transmit at 100 watts while most QRP radios max out at 10 watts. The more wattage you have, the farther your signal can travel, and the more likely you can be heard over “pile-ups,” where several operators are talking on the same frequency. That makes QRP operation especially challenging.

A popular choice these days is the Icom IC-705, which has a built-in battery, a touchscreen, Wi-Fi, and can pair to a phone via Bluetooth. Another good option are radios from Elecraft like the KX2 and KX3. These radios are highly modular and are the only ham radios I’m aware of still made in the United States.

These radios aren’t cheap. Expect to spend at least $1,000 to get started. You could opt for the cheaper Xiegu G90 at around $400. I own one, and it’s a fine radio, but it doesn’t include a built-in battery, so that’s something extra to lug in your pack. 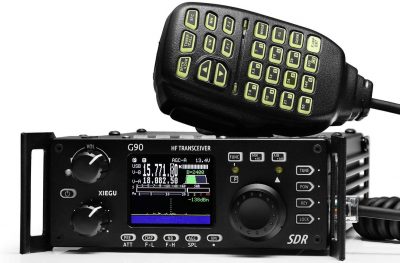 Of course, a radio is useless without an antenna. There are millions of antennas and none of them are perfect. For trekking, you want something lightweight and easy to set up. You have two options here: a wire antenna or what’s called a vertical, which is a pole, usually mounted in the field on a tripod or on your vehicle. A wire antenna will be lighter and take less space in your pack while a vertical is easier to set up but bulkier.

I would probably opt for a wire antenna. A popular choice these days is the end-fed half-wave (EFHW), which is called “end-fed” because the antenna connector is on one end, unlike a traditional dipole, which has a connector in the center. EFHWs also often work on several bands, unlike dipoles which are tuned to only one band.

EFHWs are versatile antennas. You can toss one over a tree branch or sometimes even a vehicle, connect it to your radio, and you’re good to go.

You also need a way to get the antenna high up in a tree. A lot of hams use slingshots or arrows, but those will get you in trouble with park rangers fast, and there’s a chance you could hit a bystander. A useful tool is an arborist line and throw weight, which is basically a bean bag. The arborist line is nice and smooth and doesn’t tend to kink. Just whatever you do, don’t try to pull a weight back up into a tree after the line is over a branch, that’s a good way to get it stuck. Ask me how I know.

Before you venture to a park for POTA, check with the park office to make sure they’re okay with what you’re doing. They may make you pay for a permit or state other rules, like no stakes in the ground.